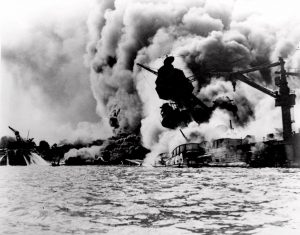 FILE–The infamous Japanese attack on Pearl Harbor, Hawaii, is shown in this Dec. 7, 1941 file photo. The USS Arizona is pictured in flames after being hit. Radio announcer Roger Krupp didn’t hesitate to interrupt his Sunday programming, Dec. 7, 1941, to read The Associated Press news flash to listeners of WTCN-AM in Minneapolis. Now officials at Sotheby’s auction house say he may, in fact, have been the first announcer to hit the air with news of the attack that drew the United States into World WarII. Media experts and World War II historians are skeptical of the claim, but Sotheby’s expects to fetch $3,000 to $5,000 for the tattered teletype in an auction scheduled to take place Monday in New York. (AP Photo/U.S. Navy, File)